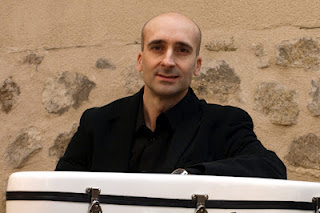 Ignacio Gea is recognised internationally as one of Spain’s most versatile and imaginative musicians and among today's most engaging guitarists.

Born in Valencia, Spain, Mr. Gea beginning his guitar studies with María Ángeles Abad and Rafael Cabedo at the Conservatorio “Joaquín Rodrigo” in Valencia. He was selected by José Tomás for a scholarship to study with the legendary master at the Conservatorio Superior de Música “Oscar Esplá” in Alicante. He also studied under virtuosos such as David Russell, Manuel Barrueco, Leo Brouwer, Roberto Ausell, José Miguel Moreno, Konrad Junghänel and Hopkinson Smith.

Though his performances overseas and throughout Spain have included radio and television broadcasts, recordings, chamber music concerts and recitals. His recital programs invariably include shorter works, of which he is so fond, as well as the larger masterpieces of the guitar repertory.

Mr. Gea is in demand for a wide variety of chamber music alliances, as well as appearing on major international concert platforms in recitals and concerto performances. He has performed chamber music at festivals and concerts with a wide range of noted artists and ensembles. He appears in duo concerts in Europe and América with his wife, the outstanding Argentinian guitarist Marisa Gómez.

He has recorded for Onda Cero Radio, Catalonian Television and Gadiraifa Records.

Mr. Gea currently combines concerts with teaching as a guitar teacher at the "Adolfo Salazar" Professional Music Conservatory in Madrid.